Traditional systems of medicines are being used since centuries for healthcare by people in countries of the South-East Asia Region as well as in other parts of the world. In recent times, public interest has shifted towards traditional medicines for various reasons. World Health Organization (WHO) also encourages, recommends, and promotes traditional medicines in national health programs because such drugs are easily available, comparatively safe, people have faith in such remedies, and their industrial production is environment friendly.

Ayurveda, the Indian traditional medicine is a science developed by the experiences and wisdom of Indian ancestors and its contribution in global healthcare could be pivotal. The potential of Ayurveda in providing primary health care has received global attention leading to its globalization at a fast pace. To sustain the present momentum and to meet the ensuing globalization, it is necessary to have a strong institutional framework.

Ayurveda uses natural resources in therapeutics after converting them into formulations. Researches and reviews published in recent years on Ayurveda formulations have helped in creating a conceptual interface between Ayurveda and Modern Science. Preliminary studies with Ayurveda formulations provided certain leads, emphasizing on their impact in preventing complications and improving the quality of life in patients suffering from various infectious and non-infectious diseases. However, all such outcomes are to be disseminated through credible platforms. World Ayurveda Congress (WAC) is one such platform where the outcomes of systematically planned studies can be disseminated. WAC invites all such initiatives at New Avenues for Ayurveda Pharmaceutics Including Development of Quality and Safety Standards for Ayurveda Drugs. 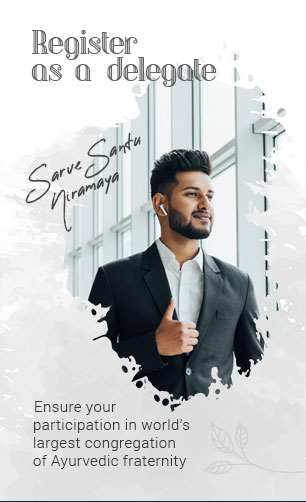